Sorry to post three consecutive times... Hope it is ok.

It's nice to know that Simpson which had aired on 12th Jan was full of Ghibli's parody!! 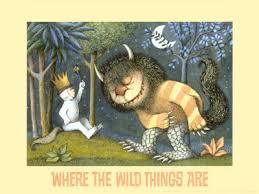 Have you read this picture book when you were little? 'Where the wild things are'. This is another Ghibli version, which I found interesting^^ 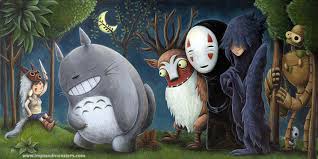 One of my most favorite Ghibli animation films, Majo no Takkyuubin 魔女の宅急便（Kiki’s Delivery Service), will be re-made into a live action film. I hope Kiki and the other actors won’t be disheartening ones. Usually live action films tend to be disappointing, as I would recall another favorite film of mine that was shown several years ago, the ‘Norwegian Wood’. I could not put up with the daikon大根 actor(I don't know how it's been called in English, very bad acting), Midori. Maybe her image was too far away from my image of Midori, which disturbed my repose. That's the reason why. Naturally each one of us creates our own image of the character when it comes to novel, anime or manga.

Another couplet of things I wrote in the past few weeks:

Title: Wolf in the Breast
Word Count: 3.2K
Rating: G
Summary: On living and dying.
Additional notes: Focuses on the mother-daughter relationship between San and Moro, as well as backstory.

I return bearing fic! There are two offerings, this time around:

I didn't see anything about selling on profile page and i can't navigate community properly to see if anything was said about this. So if sale posts are not OK, mod please delete it >_<

I'm selling 2 Ghibly movies, both are German editions, but English subs or dub are provided (with Japanese dub included), both still originally packed.
If interested please take a look for other info if necessary.

Hello! I'm not sure if posting fanfiction is a popular practice on this comm, but I recently wrote a fic for Miyazaki's gorgeous Mononoke Hime and wanted to share it here. Comments over at Archive of Our Own are always appreciated and welcomed!

Title: 山の木霊 (or, Echoes of the Mountain)
Word Count: Roughly 14,500
Rating: M-ish for sexuality
Summary: San welcomes Ashitaka into her den.
Additional Notes: Post-canon, San/Ashitaka. A sexy-medieval-fantasy-Japan!slice of life to add to your day. Scenic landmarks and Ghibli shoutouts included for your perusal.